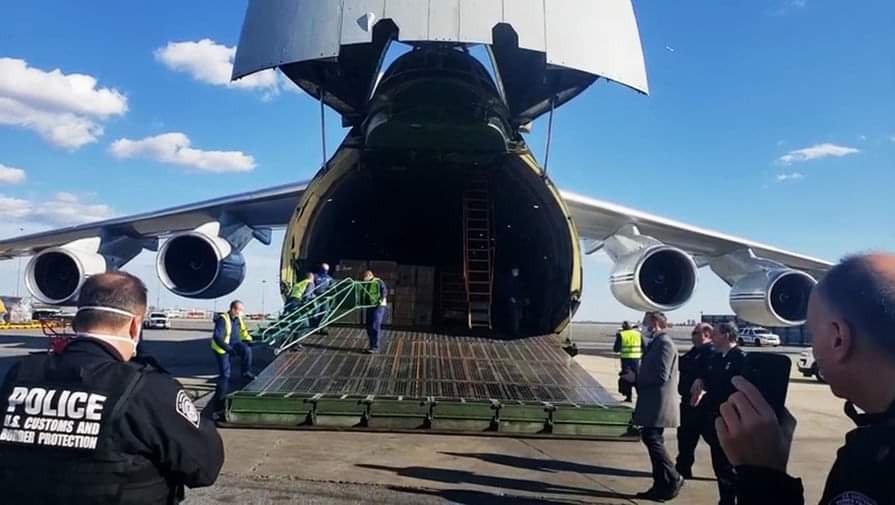 The United States will put into immediate use the medical equipment received from Russia, US Embassy spokeswoman Rebecca Ross told TASS on Wednesday.

“We expect Russia to deliver a planeload of personal protection equipment and supplies today, as President Putin offered President Trump on Monday,” she said. “We will put into immediate use any needed items that are FDA [US Food and Drug Administration] approved.”

“Likewise, the United States is sending equipment and supplies to many other countries and we will continue to do more as we are able,” Ross stressed.

Earlier on Wednesday, the Russian Defense Ministry reported that a Russian aircraft carrying medical masks and equipment was heading for the United States.

On Tuesday, Kremlin Spokesman Dmitry Peskov said that the two countries’ presidents, Vladimir Putin and Donald Trump, had focused in their Monday phone call on the delivery of Russian aid to the US on a plane. According to Peskov, Moscow offered aid to the US amid the acute epidemiological situation in that country, and Trump accepted it with gratitude. The Russian presidential press secretary pointed out that while offering help to Americans, the Russian president proceeded from the fact that after American producers of medical equipment have picked up steam, they will be able to reciprocate if necessary.

Johns Hopkins University, which calculates statistics based on the government, WHO and other official source numbers, reports that the US has more than 190,000 confirmed coronavirus cases, while over 4,100 people died from that infection.

In late December 2019, Chinese authorities notified the World Health Organization (WHO) about the outbreak of a previously unknown pneumonia in the city of Wuhan, in central China. Since then, cases of the novel coronavirus — named COVID-19 by the WHO — have been reported in every corner of the globe, including Russia.

On March 11, 2020, the WHO declared the coronavirus outbreak a pandemic. To date, more than 850,000 people have been infected worldwide and over 42,000 deaths have been reported. So far, a total of 2,777 coronavirus cases have been confirmed in Russia, with 190 patients having recovered from the illness. The country’s latest data indicates 24 fatalities nationwide. Earlier, the Russian government set up an Internet hotline to keep the public informed about the coronavirus situation.